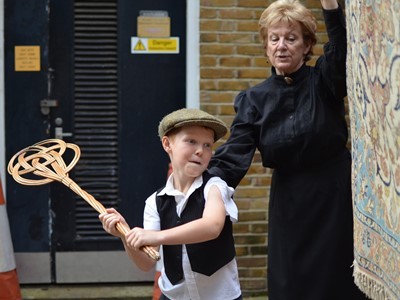 A hands on session learning the different roles servants did in the Victorian Era.

Explore vast social class differences, the reasons for the mass migration from rural areas to the towns and how things were done before modern technology.

Which season is best for this activity?

This activity is suitable for any season, taking place entirely indoors. No special clothing is required and costumes are provided.

Learning objectives and links to the national curriculum Programme of Study

The history programmes of study in the National Curriculum require that pupils in KS1 are taught about:

This activity also works well for the KS2 history programme, which requires that pupils are taught about an aspect of local history. We provide an insight into the life of a Victorian servant, comparing it to life today. Pupils will be:

By the end of the session we want the pupils to recognise the vast social class differential in the Victorian era, to understand the reasons for the mass migration from rural areas to the towns, and to experience life in service.

Outline of the Activity

The activity starts in the classroom, with a general introduction to life as a servant in Victorian times. We introduce “White Lodge” in Richmond Park, now home to the Royal Ballet School but formerly the residence of the Duke & Duchess of Teck, cousins to Queen Victoria. Local people were trained to work in service at White Lodge. The scenario is that staff are needed to help in the house; we ask the children what services they think would be required and promise them jobs in the Lodge if they succeed in the tasks set for them today.

The children will be dressed in costume and lined up by the Housekeeper to be read the very strict rules of the house e.g. annual salary, working hours, etc.  The class will then divide into four groups to carry out the duties of Housemaid, Valet, Cook and Laundry Maid. The tasks are hands-on, and include carpet beating, laying the fire in the range and hanging wet washing on the clothes line.

At the end of the session the children return to the classroom and talk about the changes in social conditions and the difficulties of household tasks at in the past. They will then be awarded Certificates of Merit.

Ideas for follow-up work back at school