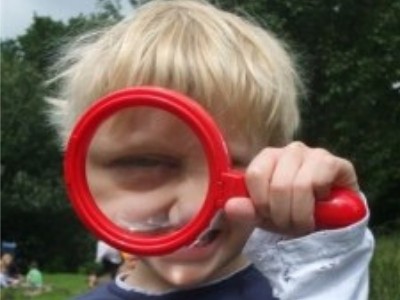 Pupils receive a 'message from Mars' asking for help to understand and learn about Richmond Park.

Pupils explore the nature trail and then make items that could help – including pictures, models, sounds, speech or written words.

Which season is best for this activity?

This activity can be done at any time of year. It takes place on the nature trail and in the main classroom. In the rare event that the weather is too bad to go on to the nature trail this session can be adjusted to take place fully in the classroom. In this event this session will be used as a replacement for whichever outdoor session was originally booked for the group.

Learning objectives and links to the national curriculum

This activity should involve the pupils in using the following practical scientific methods, processes or skills:
1 Asking questions and using their observations and ideas to suggest answers.
2 Identifying and classifying.
3 Gathering and recording data.
The session also provides a unique context for the development of spoken language at all levels in KS1 and KS2, by inviting vocabulary that rarely arises in everyday situations. By the end of the session we want the pupils to have a good knowledge of different environments on the nature trail and some of the creatures living in them,

Outline of the activity

The idea behind the session is that we have received a message from Mars asking for help to understand Richmond Park, because they have heard that it’s very beautiful. The Martians want to know how different it is from Mars. The pupils are asked to make items that could help – they can include pictures, models, sounds, speech or written words.

The pupils are divided into three groups and take trays out to the nature trail to find things to bring back to the classroom. Two groups will have Polaroid cameras and the third will have a sound recorder. They will be told they can take two Polaroid photographs and a sound recording to go into the rocket they are going to make to send to Mars. They must decide among themselves what to photograph and record. They will look for insects under logs and discuss habitats, camouflage and food chains. They will look in trays by the pond containing pond creatures and discuss the importance of ponds as a habitat. Depending on age the group could be asked to assess the health of the pond using a system which decides the health of water by assessing what creatures live in it. Finally, they will collect leaves, twigs, stones, flowers – anything they wish to take back to the classroom to give them inspiration. Each group will spend ten or fifteen minutes on each activity.

The rest of the session will involve the pupils using their imaginations and any of the craft materials available, together with the facts they have learned, to make items to be sent to Mars in a rocket (also made by the group)

A general discussion of the solar system and the differences between planets would be useful. What is it like on Mars? Do they think there are real Martians? What is Richmond Park like?

Ideas for follow-up work back at school

The class will take the rocket they have made and their models, etc back to school. Any unfinished work can be completed and a discussion could follow about how the rocket might go to Mars.