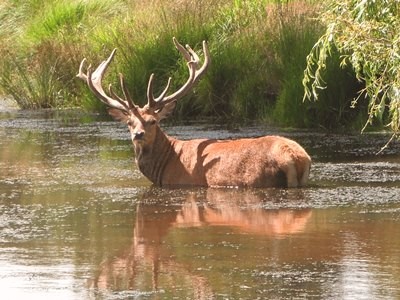 Richmond Park is approximately 12 miles from Central London, yet it is a green and tranquil oasis, with a beautiful landscape, a host of wildlife and a fascinating history.  The Park has been designated a National Nature Reserve, a Site of Special Scientific Interest (SSSI) and a European Special Area of Conservation to protect its rare invertebrates, ancient oak trees and acid grassland.

Charles I enclosed Richmond Park during 1637 with an 8 mile wall to create his private hunting ground and deer park.  Approximately 630 red and fallow deer, the descendants of the original herd wander throughout the Park.  Centuries of deer grazing have created a very special habitat, the largest and most important area of lowland acid grassland in the Greater London region.  The Park is also home to 130,000 trees, of which 1,100 are veteran oaks (over 300 years old), to 60 breeding species of birds, and to rare species of beetles, butterflies, wildflowers and fungi.

To safeguard the Park, its ecology and wildlife, please “Tread Lightly” by:

Learn more about Tread Lightly at the Friends of Richmond Park website here. On their site you can also find a wealth of information about the Park, including a downloadable map, opening times and information on its ecology.